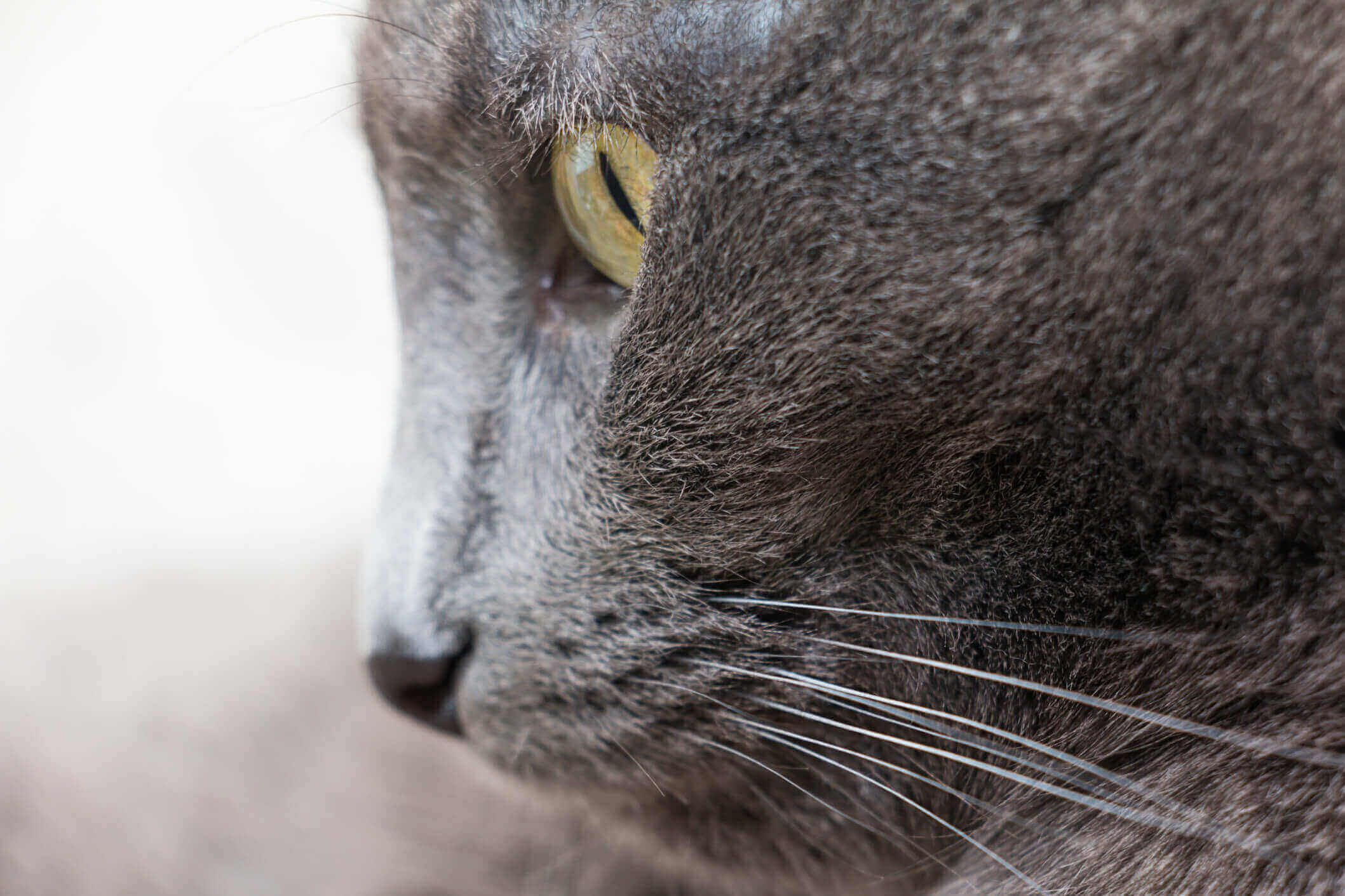 If the cat you have that is supposedly Russian blue has golden eyes then you need to ask different sets of questions.

In this article you’ll know the why, the what, the how which, and the when related to the eye colors of Russian blue.

Can Russian Blue Have Golden Eyes?

No. The straight and short answer to the question asked above is No. There are no ifs, buts, or in the possibility of Russian blue (purebred) having golden eyes.

If you have a Russian blue cat with golden eyes, do you really have a pure bloodline of Russian Blue or a mix?

There is no chance that Russian blues are born with golden eyes or develop them later in life. You may confuse the yellow color with the golden one but the answer will still be No for golden eyes.

One of the most fascinating and distinguishing features of Russian blue is their eyes. Most of the cats are born with bright blue eyes, but your beloved Russian blue has got something unique in their pouch.

The two colors that are normal for a Russian blue cat to have are Yellow and Green. Russian blue kitten has yellow eyes whereas an adult Russian Blue has emerald green eyes.

These are the only two colors that your Russian blue cats can have if it is a pure breed. Russian blue that comes from the pure bloodline doesn’t deviate alongside the road of their life even for the eyes.

If you have a cat with similar features as Russian except for the eyes, then it is better to get your papers checked.

Most of the cats are born with bright blue eyes, but your beloved Russian blue has got something unique in their pouch.

Russian blue cats are born with beautiful yellow eyes that you can see once they open their eyes after a few days of birth.

But will they stick with the yellow-colored eyes for their whole life? No, absolutely not, these cats eye color changes to emerald green after a while.

While the other cats develop their eyes from blue to deepened blue color, Russian blue eyes graduate to the green from yellow.

The change starts to occur after 4 months of age. You will start to see a green rim around the yellow-colored iris of the eye of Russian blue.

Russian blue starts to develop the pigment cells, melanocytes after they are born. This production and application process will take some time.

Hence, the production of melanocytes in the body of the Russian blue makes or forces their eye color to change.

It is just a simple theory of pigmentation where the cat’s eyes change from one color to another after a while.

What Does It Mean If Your Cat Has Golden Eyes?

Few of the things top the list of the complication that might take place with the whole golden eyes’ facades.

Here are the things that are possible when you see your cat has golden eyes:

There is a thin possibility where your Russian blue ancestry might have a derivation somewhere. Meaning that one of the ancestors might have been a crossbred cat with a recessive factor as golden eyes.

Parents pass the genes to their offspring with both dominant and recessive characters. So, it may occur in one of the kittens while remains dormant in others.

Your cat might be a cross product between Russian blue and another breed of cat that has golden eyes. Russian blue will only have yellow or green eyes.

You might think your cat is a Russian blue as it might showcase most of the features similar except the eyes.

If you don’t have a pedigree that clearly states your cat as Russian blue then you might have predicted it wrong.

Chartreux is one of the blue cats that has similar features as Russian blue and has gold eyes. There is a chance that your cat might be of Chartreux breed and may have mistaken it as Russian Blue.

How Can You Tell If Your Russian Blue Is Purebred?

It is okay to wonder whether the blue cat you have is Russian blue and is from the pure breed or not.

So here is what you can do to confirm your queries:

Pedigree is the paperwork that you need to get while you adopt a cat. This paper has all the ancestral information you will need to confirm whether your cat is a pure breed or not.

Buy Russian Blue From A Breeder

If you buy or adopt your cat from a breeder who is experienced and expert, then there will be less chance to get a mix.

S/he will provide you all the information you’ll need about your cat and will even give you paperwork for proof.

If you have randomly adopted the blue cat and don’t know how to identify it, ask for an expert’s advice.

Experienced people have a good eye to detect and identify the cat breed just by looking at them closely. It cannot be 100% accurate but you’ll have a little idea about the breed and its need.

Something is better than nothing, isn’t it? And whatever the breed of the cat is, it will love you all the same as you’ll adore it.

You might come across many related questions so here are the answers to a few of them to clear your confusion.

At What Age Do Russian Blue Eyes Turn Green?

Russian blue develops pigment cells within the first 3 months of their life. Hence, you’ll start seeing the change after the 4 months of age where their eyes change from yellow to green.

Can A Russian Blue Have Yellow Eyes?

Yes, absolutely, Russian blue cat is born with yellow eyes although the color will change to emerald green eventually.

In conclusion, Russian blue cats are one of the most affectionate, intelligent, and loyal cats even if they are a mix. If your cat has 50% traits of Russian blue, then it will, no doubt, be 100% adorable and loving. You need to learn how to take care of these domestic short Russian Blue cat with blue eyes although most of the things are the same.