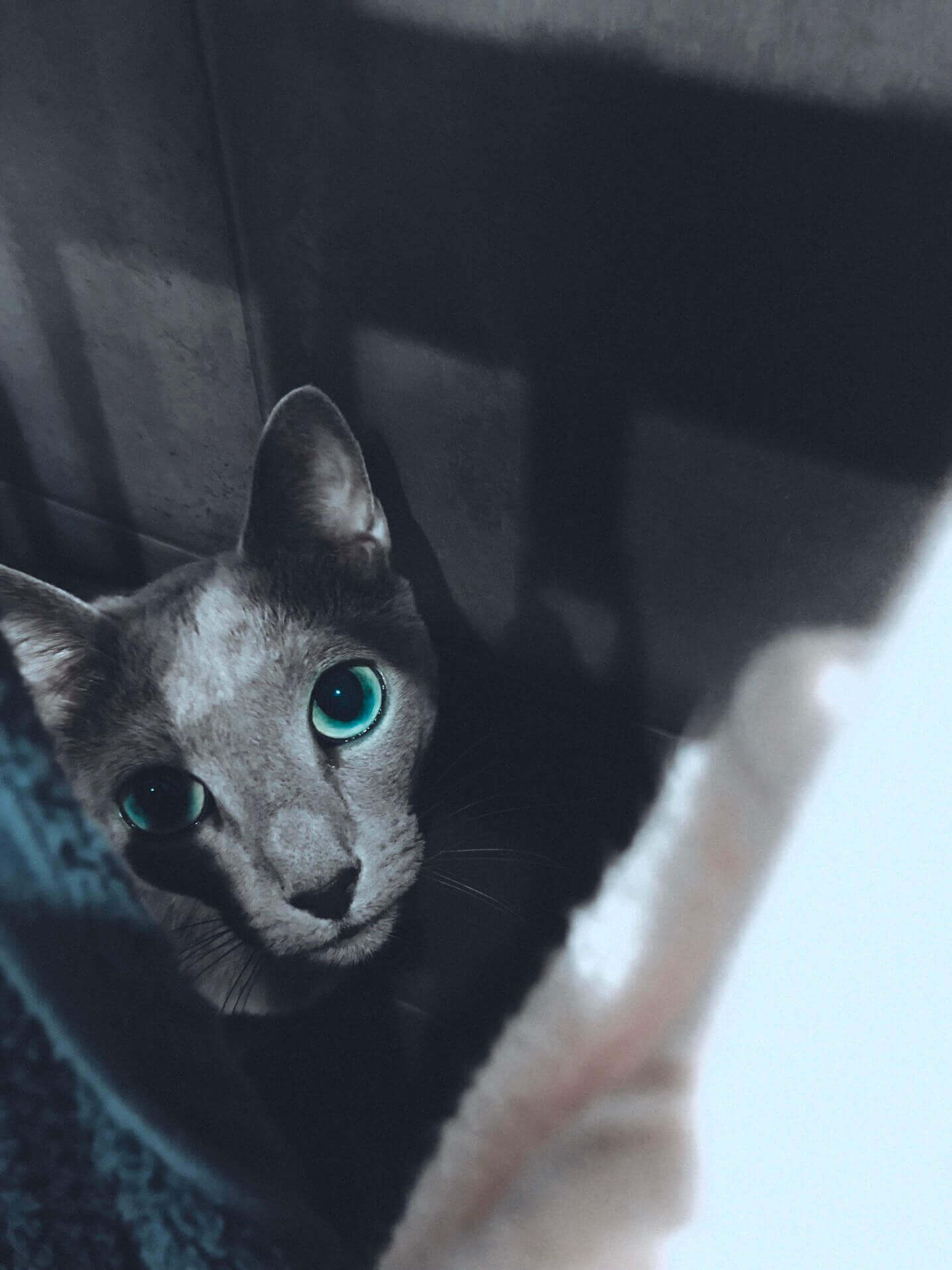 Yes, Russian Blue kittens have yellow-tinted green eyes. These eyes change into emerald green as they gradually grow into adults. This process is probably the best thing you could encounter as an owner. The change occurs within 4 months. In 3 to 6 months, the eyes start turning from yellow to green.

Let us find out more about Russian Blue kittens’ eyes, how it changes color, when it changes the color, and do they actually change their color or not.

What Color Are Your Russian Blue Kittens’ Eyes?

Many cats have blue eyes. The color also retains throughout life for some. Apparently, you might have thought that Russian Blues have blue eyes by the feline friend’s name.

However, if you look into Russian Blue Kittens’ eyes, you will know that they have yellow eyes.

Many cats have the spectrum of color that they will have as adults. This is why you might also see that Russian Blue kittens’ eyes have a spectrum of green even though their eyes are initially yellow.

To know more about why and when Russian Blue kittens’ eyes change color, then keep on reading!

What Color Are Your Adult Russian Blue Cats’ Eyes?

Russian Blue cat’s eyes do not always stay the same. The kitten has yellow eyes at the start but will they always remain the same?

Well, no. You can spot a Russian Blue Cat because of its striking emerald green eyes. One of the most attractive features of the Russian Blue apart from its thick fur coat and the best intelligent personality!

By the above topics, you might have figured it out. YES. Russian blue kittens’ eyes do change color with time from yellow to emerald green.

Why Do My Russian Blue Kittens’ Eyes Have Yellow Color?

Russian Blue cats, unlike other kittens, have yellow colored eyes when they are small. Other kittens are naturally born with blue eyes and they change in color depending on the melanin in the iris.

When do Russian Blue kittens’ eyes change color to emerald green then? Stay tuned to find out.

The blue color in most kittens’ eyes is because they do not have color combined with the refraction of light. However, it is not the case with Russian Blues as they have yellow eyes.

The reason behind them having yellow eyes is the transparency degree of the outer layer of the eye. What adds up to it is the available pigment of the iris.

Fun fact: Kittens are born with their eyes shut!

Things To Know About Your Russian Blue Kittens’ Eyes

There are some things that you need to know about Russian Blue kittens’ eyes. The foremost thing is whether the kittens’ eyes are shut.

This means that the eyes are not useful at all at birth. Not only their eyes, but the furry animals are also coatless. Similarly, ears are also closed as these body parts are not developed at birth.

Unlike these senses, your kitten will be able to connect with you through touch and smell as soon as they come into the world.

If the mother Russian Blue cat is there with you, your kitten will be able to sleep and eat. As the kitten grows alongside its mother, the eyes grow sight with time.

Russian Blue Cat maturely opens in the second week of their life. This pace can be from 7 to 14 days after their birth. On the 4th to 9th day, the eyelids begin to separate. After that, it will approximately take 2 to three days to fully open.

A fun fact about it is that even after your kittens’ eyes open, they are not fully functional. Why? It is because your Russian blue kitten will not be able to process light as well as interpret the sensory input until the kittens are fully mature.

Besides, your Russian blue kitten will achieve full visual maturity from 5th to 7th week approximately. Most kittens will achieve full ocular and visual functionality at some point between weeks five and seven.

After the developmental period of five weeks to seven weeks, your Russian Blue cat will reach its visual maturity. But the adult eye coloration takes time to develop in itself.

You will be able to see the gorgeous emerald green eyes from around 3-6 months of age. Isn’t it amazing how they get vision first and then change the color of their eyes?

When Russian Blue eyes open, they are faded yellow in color. The color is because of refracted light off the cornea.

It is further enhanced by the outer transparent covering of the eyeballs. In addition, the relative thickness of its four layers acts as a contributing factor.

From week six to week seven, kittens’ eye color change starts to occur. The melanocytes that are present in the colored part of the iris of the eye start producing melanin.

The process occurs they mature. This melanin helps the eye get its mature adult coloration. More the melanocytes more melanin they release. Hence, all these factors define the final eye color with the required depth or intensity.

Light green means a cat’s iris has produced the least amount of melanin which might be the reason why Russian Blue cats have green eyes in the first place.

Russian Blue Cats have a remarkable set of eyes as the color is attractive in itself. The cats develop eyes as they grow.

From being blind at birth to having eyes that can see the slightest movements in the dark, I am amazed every time I think about cat eyes. Moreover, Russian Blue is also attractive due to its thick blue-black fur.

After having undergone spay and neuter procedures, kittens have various changes in their development. If you adopt a cat or buy from shelters or pet stores, you will skip this level.

However, it is a truly mesmerizing rapid process to watch. You might also miss this change in eye color if you bring in a kitten of higher age. In the rare cases when the kittens’ development is slow, you will be lucky enough to catch the eye color change.

Apart from that, the Russian Blue cat’s color does not change with age. Besides, your cat must have a consistent eye color all their life.

So, what if the eye color changes from green to something else with age? I am sorry to break it to you that it means your cat has some health issues.

What’s more? Eye infections and uveitis to leukemia and feline immunodeficiency virus are the diseases that might infect your cat’s eyes which could be the reason for color change.

So, if you notice any sudden changes, you should go to the vet as soon as possible. The very decision will help you solve lots of problems.

Russian Blue cats do have a rarity in personality as they are more personable, quiet, observant, and sweet. These cats will surprise you by following you almost everywhere and waiting at the door when you come home.

Besides, the famous Mona Lisa smile is only applicable to the Russian Blue Cat. Although its personalities are a bit rare to themselves, its availability is not so rare as people portray.

Russian Blue cats can be easily spotted in shelters or pet stores in the United States.

Does A Russian Blue Cat Have Yellow Eyes?

No, the Russian Blue has green eyes while it may have yellow eyes when it is small. The eyes change color as they grow up. From week five to seven, you will start to see the change.

Does A Russian Blue Cat Have Blue Eyes?

No, the Russian Blue cats never have blue eyes. Unlike what most people might think due to its name, the Russian blue can only have two colors of eyes. One is yellow when they are kitten and the other one is vivid green when they are full-grown adults.

Besides that, if your gray cat has some other eye color, you have brought in an imposter of the Russian Blue cat. It can be a British Shorthair or Scottish Fold.

How Smart Are Russian Blue Cats?

Russian Blue cats are pretty smart and calm for cat breeds. They have an observant nature which pushes them to be more caring and understandable.

Moreover, you will find your Russian Blue intelligent enough to pull off some tricks and in a short period. These cats have a history there as they were the first cats to make it to Europe in the 1800s for cat shows.

Amazing, isn’t it? When it comes to a Russian Blue cat, you have a companion with you instead of a pet.

Finally, I would like to conclude by saying that Russian Blue eyes are the best way to know the cat is not an imposter. So, you should know what color a Russian blue kitten has. Along with it, you shall know when and why do they change.

I hope that most of the questions were answered from this article about the Russian Blue Kittens’ eyes. You can also leave comments below if you have more.