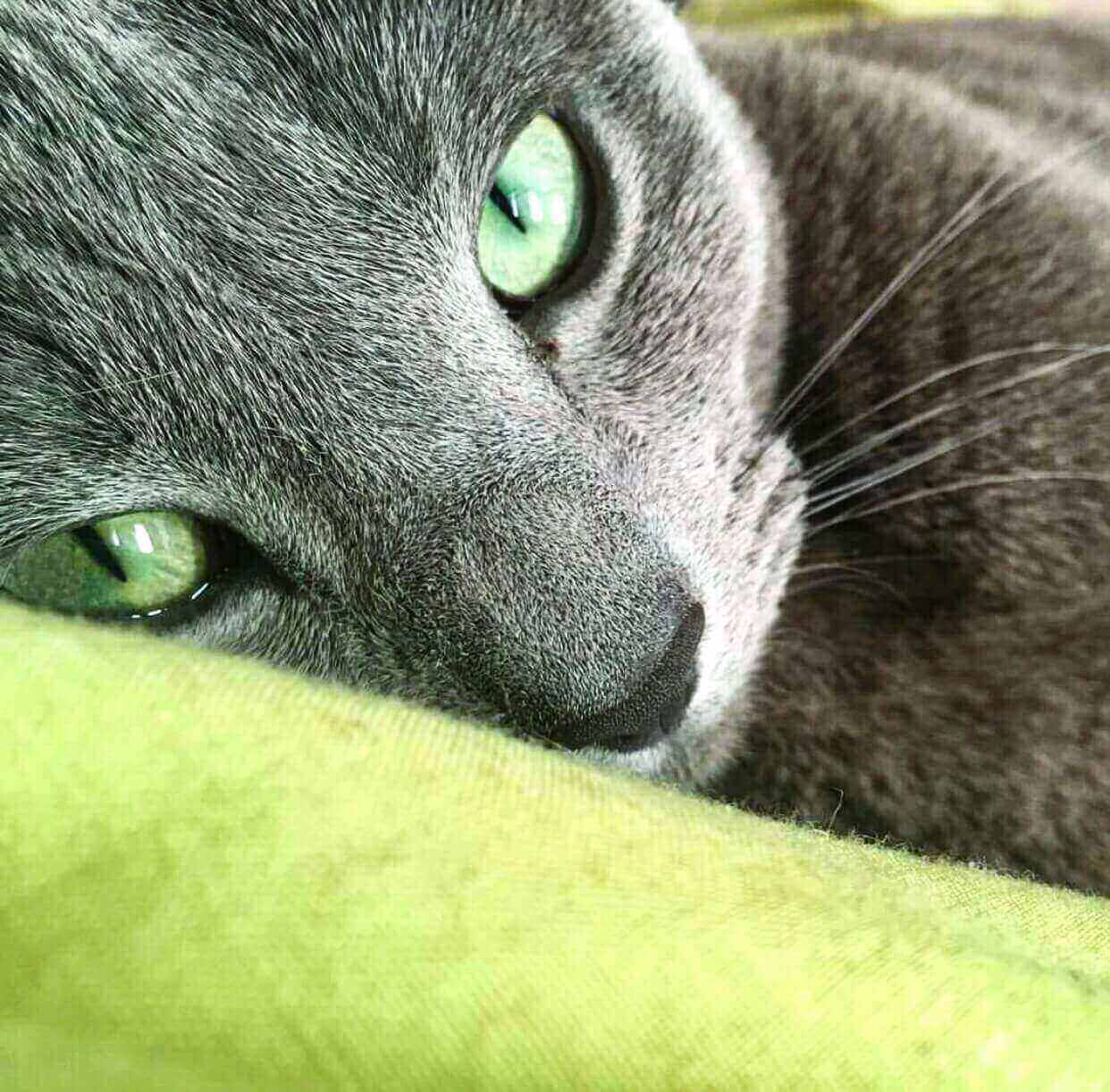 Generally, when people adopt the Russian Blue Cat, they purchase or adopt cats when they are about 12 weeks old. During this time, you will see that the eyes of Russian Blue are blue. Once they get older, the cat’s eyes start to change to green. This usually confuses most of the owners and they become very concerned. I assure you that this is not a matter to worry and concern. Read this article to know at what age a Russian Blue cat’s eye turns green.

The Russian Blue Cat is one of the stunning domestic cats having beautiful features. These cats have a certain elegance to them that draws most people. Especially, the eyes. The Russian Blue Cat has majestic emerald green eyes. However, when the cats are born the eyes are yellow. Somewhere at the age of 4 months, i.e. 14 weeks the Russian Blue Cat’s eye starts to turn green. This is the sign that the cat is growing up into an adult.

Find out more in this article.

What Is the Color of Russian Blue Cat’s Eye When They Are Born?

Commonly, most kittens have blue eyes when they are born. The blue eyes later turn to brown or yellow as the cats grow. Russian Blue Cats are a special case where they are born with yellow eyes. Once the Russian Blues grow fully, they have deep emerald green eyes.

At What Age Do Russian Blue Cat’s Eye Turn Green?

One of the most fascinating features of the Russian Blue Cat is their eyes. Being born with yellow eyes, they can captivate anyone. Roughly, you can see a bright green ring around the cat’s pupil at around 4 months old.

As the cat matures, eye colors become vibrant and vivid green, and the already impressive blue-silver coloring of the cat improves in aesthetic terms. The eyes are rounded and slightly inclined in the upper edges.

Do All Russian Blue Cat Have Green Eyes?

What Determines the Color of Eyes?

The color of the eyes of a cat is due to a variety of factors in the iris. It is all cellular. Through the production of melanin and melanocyte. Two variables, hue, and intensity decide the color.

The color of the eyes is more intense when there is more melanin. The melanocytes found in the iris controls the eye color. The green color of the cat’s eye is due to less melanin mixing pigment-producing pheomelanin.

Will The Eyes Color Change With The Age?

The cat’s eyes are very mysterious. Do you know that most kittens when they are born are functionally blind? Along with the development of their fur coats, body, and other structures, their eyes also develop with time.

Cats such as Russian Blue have yellow eyes and then later green. Any changes in eyes that you see may not be natural. Change in eye color is one of the last processes we will see if the schedule is right.

When a cat is mature in its physical state, its eyes should be consistent all life. Therefore, the answer is “no”, the Russian Blue Cat’s will not change according to their age.

What Does Changing Eye Color Of Your Cat Mean?

The eyes are windows to one’s soul. Especially, in the cats. They have beautiful eyes, which is one of the promising features of the species. If you have a Russian Blue Cat, you will definitely see the cat’s eye turn green after they are 4 months old. The coloring changing in the cat’s eye can indicate Russian Blue’s life into adulthood. However, it can also indicate a serious health issue in cats.

Regular cats have cats that change color naturally. Most of the kittens are born blue-eyed.  The kitten’s eye turns into yellow and orange to amber, copper and brown, when they turn about 8 weeks. This is a natural process and not a big concern for the owners.

Drastic changes in the eye color then, of course, you will need to worry. If you see unusual changes then there must be something wrong with the cat. In the case of Russian Blue Cats, the cat’s eye will turn from yellow to vivid green and not any color.

Some of the eyes infection that could occur in your Russian Blue Cat that could change their eye color are discussed below:

For example, uveitis can cause due to trauma in the eye, infections due to bacteria and fungus, tumors, diabetes, etc. You will see redness, cloudy eye, light sensitivity, squinting, eye rubbing, etc. in your cat’s eye.

The most common of all feline eye disorders is a feline membrane (conjunctive) inflammation. It separates the inner surface of a cat’s eyelid and coats the outside of the eyeball surface. When you see your Russian Cat with conjunctivitis, their eyes turn red or swollen.

In certain cats, copper-colored eyes are common. However, the Russian Blue cats will never have their eye color as copper. If you see the Russian Blues eye turn into this color then they are probably suffering from the portosystemic shunt.

A portosystemic shunt (PSS) is an abnormal vessel, which can bypass blood from the animal’s gut to the liver. Then, toxins, proteins, hormones, and nutrients consumed by the intestines, often bypass the liver, which circulates throughout the body and induces further degradation of liver function. This causes a change in eye color in cats.

The sweet-natured Russian Blue cat is known for its bright-blue cover, large head, and wonderfully green eyes. Powerful, agile, and sophisticated. Its coat ranges from bright, silverfish to dark, slate-grey in shades, unbelievably smooth and fluffy. They have the traditional silver hair that gives a lovely shimmering finish.

On my final thought, before you purchase the Russian Blue cat, you should understand every characteristic and feature of the cat. Not understanding the changes that occur in your cats can make you worry without reason. Hence, I say even the minute details about the cat such as at what age do Russian blue cat’s eye turn green is very important.

In addition, you also have to take care of the eye diseases and not assume that the cat’s eye turns into different colors according to their age.