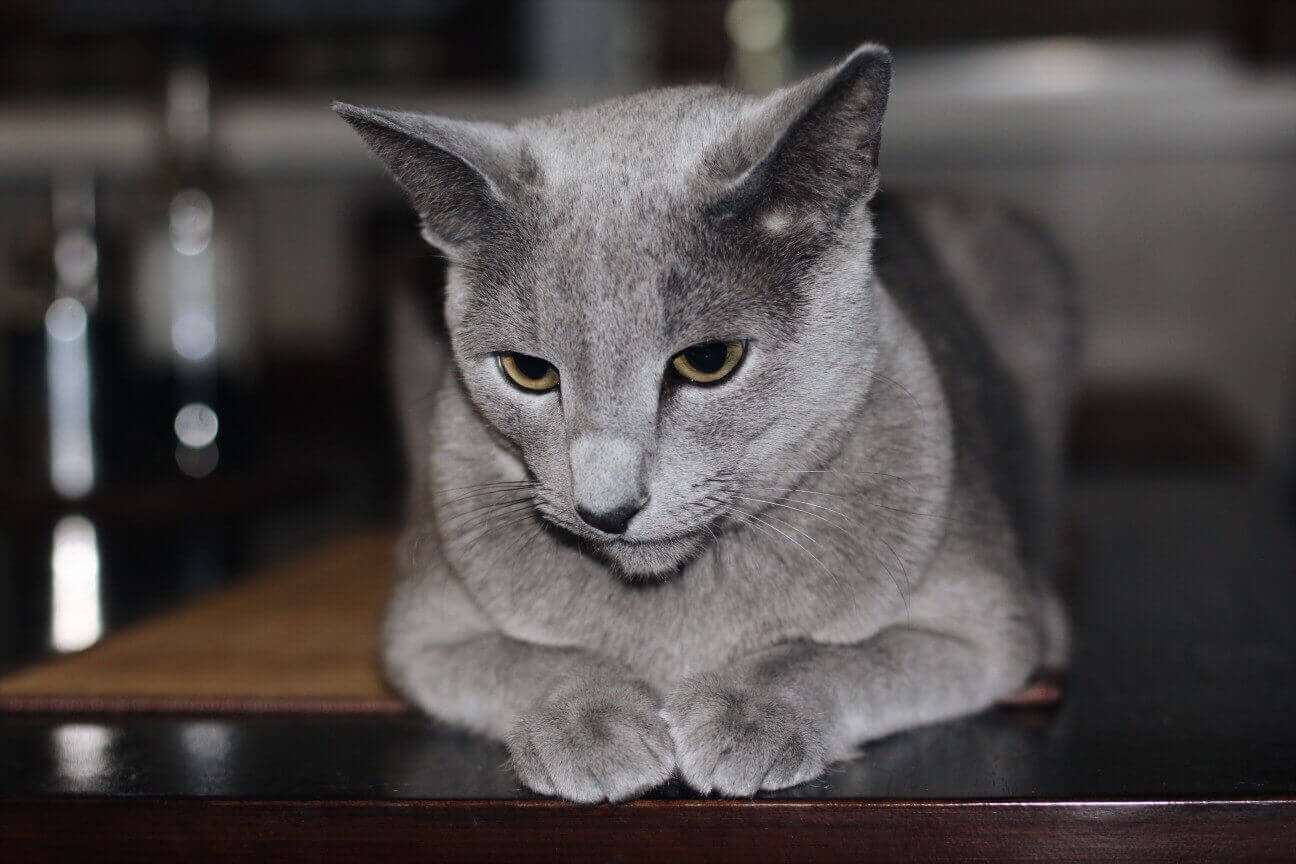 Most of the veterinarian support the concept of neutering/spaying. Also, it is one of the most crucial parts of being a responsible owner. So, it becomes your responsibility to neuter your Russian Blue.

Moreover, you should neuter your Russian Blue in between four and six months old because: on one hand, at this age your Russian Blue Cat is physically matured, and on the other hand, he doesn’t develop any undesirable male cat traits ( like spraying, fighting, or unsociability).

Why You Should Neuter Your Russian Blue [Reasons]

So should you neuter your Russian blue? Yes but why? Neutering your Russian Blue benefits you as well as your cat. As a whole, it promotes your cat’s health.

Neutering your female Russian Blue before her first estrous cycle (being able to breed) reduces the risk of cervical and ovarian cancer.

When you remove the ovary, the levels of hormones that encourage the growth of cancerous tumors reduces, and your cat is at less risk of getting ovarian or even mammary cancer.

Besides, there occurs other diseases when your Russian Blue performs his natural behavior when he mates. Diseases like Feline Leukaemia and Feline AIDS are transmitted when an infected cat bites other cats.

Therefore, by neutering your Russian Blue, you will prevent him from getting any diseases and he remains to be your healthy feline.

Nevertheless, these diseases are different from human AIDS and Leukaemia, so a human cannot get infected.

Unneutered cats have the urge to fight over mates and defend their territory against intruders. They are driven by their hormones. Especially, when there is a female cat nearby, fights tend to break out. By neutering your felines, you will reduce their aggressive instincts.

Lessens the Risk of Roaming

When a female cat goes into the estrous cycle (goes into heat), she has the urge to find a mate. And, if she is your only cat, she will try to sneak out every chance she gets in the search of a mate. The same goes for the male cat as well. He is also driven by his hormones to find a mate.

In such a case, both male and female Russian Blue are at risk of an outdoor environment. And, once they are out, they are exposed to many dangers whether it be getting injured, getting lost, or getting killed.

So, once you neuter your Russian Blue, she will not have that kind of wanderlust and will stay happy inside a home on her comfy couch.

Male Russian Blue sprays his urine on the vertical surfaces to mark his territory. And, the pungent odor of an unneutered cat’s urine alerts other males that another cat is in the area, and not only that, it also tells the female that he is waiting to mate with her.

Again, this doesn’t mean a neutered cat won’t spray. He does, but the smell is very mild.

Besides, a female cat also sprays when she is in heat. Her spray will also alert males that a fertile female is nearby.

Therefore, neutering and spaying both male and female cat keeps the home clean and avoids your cat from mating, or even having a desire to mate.

A female cat can produce up to six kittens three times a year which gives you a lot more work. You have to feed kittens and their mother. And, finding the right food for kittens is a very tough job.

Also, you have to take care of your female cat during her pregnancy, and even after her pregnancy. And all that spraying and all, ugh! you will be all stressed up.

However, neutering/spaying your Russian Blue will reduce your extra work and both you and your feline can stay happy.

Thousands of unwanted cats are put to sleep every year because there are too many animals on the street and not enough homes for them. And, neutering helps many unwanted kittens from being born.

I think that neutering is an important process that a responsible cat owner has to perform. However, in every good, there is something bad. Likewise, neutering also comes with its disadvantages alongside.

Neutering/spaying can sometimes affect your Russian Blue Cats’ nervous system, causing them to eat more. Thus, they can gain weight after neutering/spaying as they grow older.

Moreover, unneutered cats usually spend their energy searching for mates and reproducing. But, neutered cats will not have this burden. They will eat equally as unneutered cats, but the calories don’t burn in the same way. Therefore, they will gain more weight.

Nonetheless, you can keep your cats fit by playing with them, allowing them to perform cat activities, and also cutting the food intake.

Anesthetics used during surgery can affect your Russian Blue’s health. Also, there is the possibility of urine-tract infection. When your cat gains weight, he moves around less and has less tendency to urinate. Therefore, urine is collected in the urinary tract and that can cause infection.

Besides, there can be post-surgery complications as well such as incontinence.

So, neutering is a very responsible and conscientious decision for any pet owner.  If you still have doubts, you must make an appointment with your veterinarian.

What Is the Right Time for Neutering/Spaying Your Russian Blue?

Russian Blue male becomes sexually mature at the age of around five months. I recommend neutering your cat when he is four months old after he completes his primary vaccinations. Some vets suggest to neuter cats when they are five months or six months old, and even that is quite safe.

However, in the case of female Russian Blue, she will come in heat as early as four and a half months. It’s better to spay her when she is four months old, or as soon as your vet says she is ready. If you do late, she will get pregnant.

Especially when you have both male and female cats in the house, take the step quickly when the time is right, or else there will be a lot of trouble.

What Will Happen If You Neutered Your Russian Blue Too Early or Too Late?

As long as your Russian Blue is eight weeks old and is two ponds in weight, there is no problem in neutering him early. As per the research, early neutering is easier in terms of animal health, and it prevents behavioral issues as well.

If you are thinking to adopt a kitten, then early neutering is a good idea. Those ideas, about you need to wait are outdated. As the American Veterinary Medical Association supports early neutering/spaying, you can perform the procedure without any fear.

Nevertheless, neutering your Russian Blue too late can create a big issue for your cat and you as well. As I said above, in the case of male Russian Blue, he will show his characteristics like spraying and marking his territory, fighting over mates, and his aggressiveness.

Besides, in the case of female Russian Blue, she will go in heat early, and late neutering will open her toward pregnancy.

Apart from that, both male and female Russian Blue Cats will sneak out in search of mates and will expose themselves to the outside environment which will bring a lot of risks.

Therefore, I wouldn’t suggest neutering your cat late or else, his/her behavior will give you a lot of trouble. For a well-behaved cat, you must follow the neutering process at the right time.

What Should You Expect?

Your veterinarian performs the surgical procedure in his office under some general anesthesia.

Your vet will give you all the instructions for pre-operative and post-operative care. You have to expect to withhold the food the night before your Russian Blue’s surgery and to bring your cat to the vet’s office at the time.

Besides, your vet will give an anesthetic to your cat during the surgery, so he will not be aware of what’s going on. In the case of male Russian Blue, a small incision is made on the testicles and then the testicles are removed. Male Russian Blue can come home the same day unless there are any complications.

However, female Russian Blue has to go through the larger incision to remove her uterus or ovary, so she is usually kept overnight and sent home the next day.

Moreover, vets will fit the cat with a paper or plastic sleeve which fits around your cat’s neck like a funnel, to keep your pet from scratching, biting, or licking at the surgical area until it heals.

How Much Does Neutering a Cat costs?

It depends on the sex of your pet. Normally, in a private clinic, vets charge from $200-$400. You also have the option to take your cat to a lower-cost clinic. Non-profits run these clinics, however, only the licensed vets perform the surgery.

Will My Russian Blue Be Different After Neutering?

Yes! Neutering will make your male cat less aggressive. It reduces the need to mark his territory by spraying. He will fight less and will become well-behaved.

Also, as I said earlier, if you do not care about your cat’s fitness, he will gain weight after neutering and become less active. Other than that, changes are all positive and you don’t need to worry about slow growth or fewer characteristics of pedigree. Just like I said earlier, it’s just a myth.

What Should I Feed My Russian Blue After Neutering?

Avoid feeding until the following morning. Then, the day after surgery you can give your Russian Blue a regular amount of water and food.

As your Russian Blue can gain weight after neutering, you must be careful about what you feed. The right blend of nutrients and calories will help your cat maintain his optimal weight. Since the anesthetics can make your cat a little nauseous, he may not eat and that’s normal.

Just keep your cat active and feed him right.