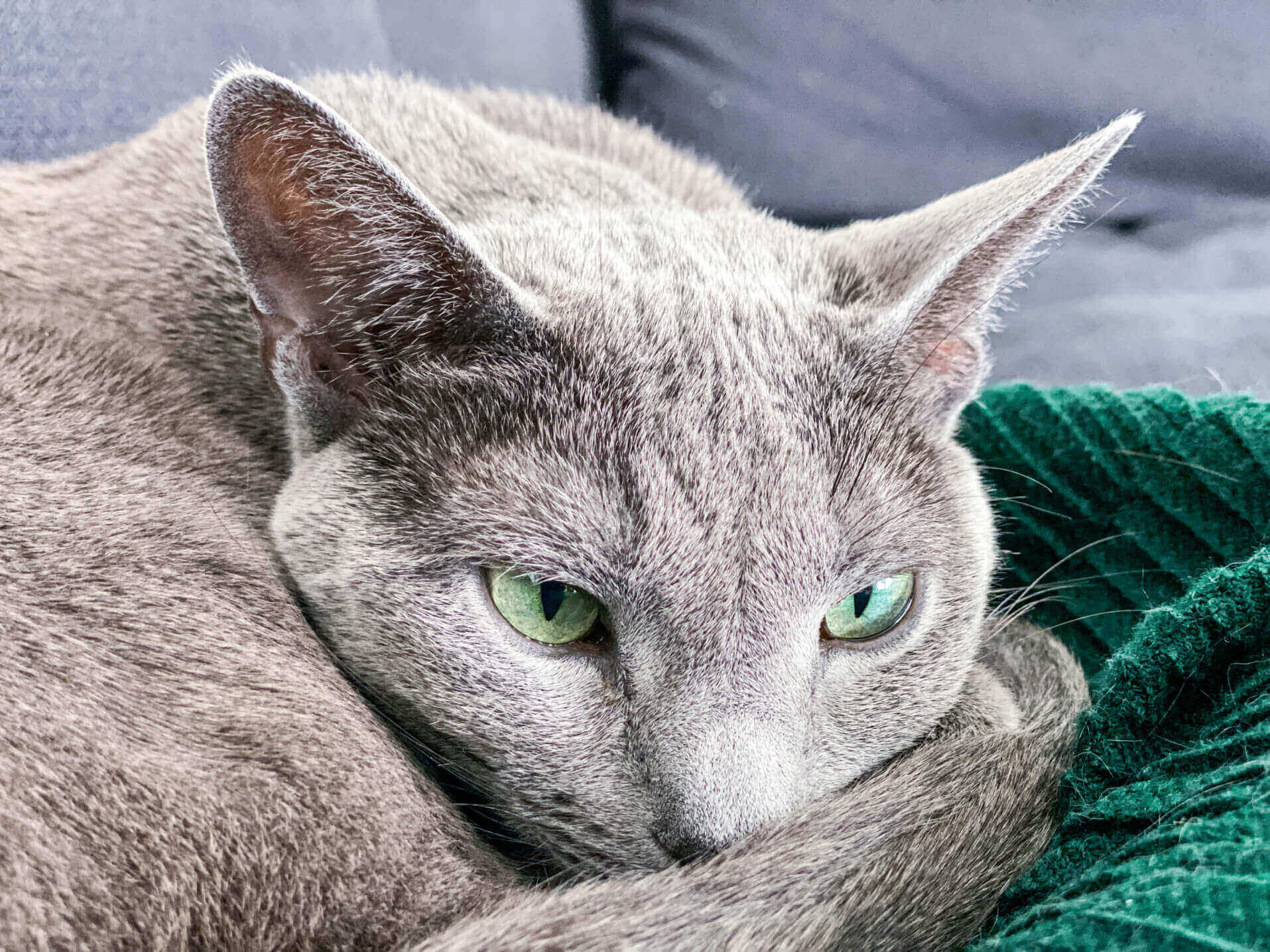 Are you an animal lover? Especially if you are into cats, you may have come across few cats having an unconventional “pushed in” appearance. This phenomenon in the cat is termed as Brachycephalic. A skull bone feature that is reduced in length, gives a “pushed in” demeanor to the face and nose of a cat. So, what type of cats are brachycephalic? Are the Russian Blue Cats brachycephalic? Find out in this article what brachycephalic cats are.

Once you understand what brachycephalic means, you will soon notice the cats that have the symptom. Brachycephalic alters the anatomy of a cat’s face. Therefore, this can lead to numerous physical health issues, such as breathing problems. Let us find out about this more in detail.

What Is Brachycephaly In Cats?

The term “Brachy” means shortened and “Cephalic” means head. The word “Brachycephaly is a scientific term for a flat face. This trait is a common abnormality in both feline and canine breeds.

The brachycephaly causes short skull bones. This problem has been associated with specific health issues in cats and dogs. In the case of cats, you might see brachycephalic characteristics is mostly Persian, Himalayan, and Burmese cats.

There is no particular identification of genes associated with brachycephaly. Even though the flat face characteristic is potentially harmful to cats and dogs, they are still “desirable”. People still demand these pets and the breeders continuously breed these animals.

The Russian Blue is a cat breed with different shades, from bright, silver, to darker, slate gray. For more than one century, their short, thick coat has characterized the Russian Blue race. The body’s thick coat is excellent.

The skull of the Russian Blue Cat is slightly long and flat when you look at it from the side profile. You see the skull slightly descending above the eyes. It continues to go down at a slightly downward angle and aligns in a straight line towards the tip of the nose.

Symptoms and Diagnosis of Brachycephaly

The narrower their skull, the harder the cat can face in their life. The explanation for this is that, although their skull is shorter, they still must align all tissues like a cat with a skull of normal size. This can lead to health issues, such as respiratory problems, dental problems, and eye problems. Cats can also have stomach problems, sleep disturbances, and temperature regulation problems. Brachycephalic obstructive airway syndrome (BAOS) is one of the extreme disorders, which associates with brachycephaly.

Abbreviated as BAOS, the Brachycephalic airway syndrome is a set of high-level airway defects related to brachycephalic dogs and cats. Animals suffering from BAOS will suffer breathability, intolerance, stress, and heat, snoring, scratching, chokes, regurgitation, and vomiting. In BAOS disorder, one or more of these defects are associated with stenotic nares, elongated palate, hypoplastic trachea, and everted-laryngeal saccules.

Narrowed or squished nostrils contribute to stenotic nares. This makes it harder to breathe and causes snoring. There are basic operations that allow noses to expand and animals to breathe. The surgeries could lead to great discomfort in your cats. It is not an ideal situation.

In the back of the mouth’s roof lies the soft palate. When extended as it occurs in BAOS positive species, the length of the mouth is actually too long, and thus prevents access to the trachea.

The trachea is a duct connecting the lungs with the pharynx and larynx. It permits air transit. The air cannot freely enter and out of the trachea while the extended soft palate blocks it. Furthermore, the hypoplastic trachea also associates with when the animal suffers from BAOS. It is a thin trachea, which often interferes with airflow.

In the BAOS affected animals, you can detect the laryngeal saccules often everted. Masses of soft tissue between the vocal folds and the lateral laryngeal wall are Laryngeal saccules. We are yet to understand their specific purpose, but it often projects into the opening of the larynx causing snoring, cough, inflammation of the nose, and shortness of breath.

BAOS symptoms can be milder or more severe, and BAOS prognosis and treatment depend on this. Often symptoms can get worse when there are factors of age and climate for instance humidity or a hot environment.

Avoidance of breeding from animals with irregular skull types is the principal way of minimizing any problems associated with brachycephaly. Importantly, Some aspects of the clinical presentation can be dealt with by the vet for cats who already have the characteristic.

Because the symptoms of brachycephalic airway syndrome aggravate by obesity, weight loss is an important part of your cats’ overweight care. You can control the disease conservatively for cats with moderate or irregular symptoms by monitoring activity levels, preventing hot or damp weather conditions, maintaining the pet throughout the summer in an air-conditioned zone, and removing stresses.

The short-term relief of airway inflammation or airway pressure can all rely on corticosteroids (prednisolone), nonsteroidal anti-inflammatory medicines (NSAIDs), and oxygen therapy. Medical control of this disorder, however, does not correct the anatomical anomalies.

Surgery is the recommended option if physiological anomalies interfere with the respiration of the animal. The reversal of the stenotic nares can be surgically by preventing airflow through the nose-lines by preventing a tissue wedge. Operational shortens of an extended soft palate to a standard length are possible.

The cost of the brachycephalic syndrome will depend on how severe the condition is and how the obstructions heal in the airways of these animals. A soft palate resection of about US$ 500 and US$ 1,500. Resection of stenotic nares: from $200 to $1,000.