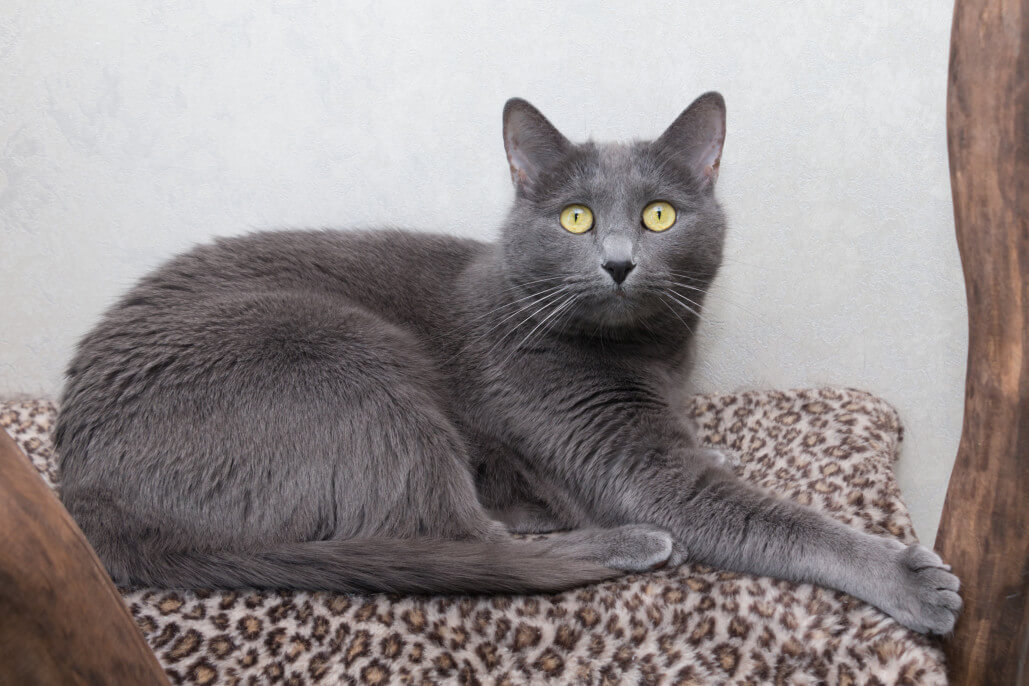 Russian Blue Cats are a beautiful breed of cats who have been captivating people for years. Russian Blues have been successful in winning hearts from the left and right, with a loving personality. Not only that but, Russian Blues are extraordinarily easy on the eyes as well.

If you have ever seen a Russian Blue cat up-close, then I am sure that the Russian Blue will have made you wonder about them for a long time.

Today, dear reader, the mystery that surrounds Russian Blues will be unfolded!

Well, I am here to fascinate you with reasons as to why Russian Blue cats are simply the best cats to be around. Let’s delve into this!

Russian Blue cats hail from Russia, where they could survive in cold weather due to their stunning plush-blue coat.

Russian Blues are intelligent and low-maintenance cats who can clean after themselves. These lovely felines are extremely affectionate to their loved ones yet it might be hard to believe that they still have hunters’ instincts and act as pest control.

Russian Blues are, sort of, hypoallergenic cats. How wonderful is that for people allergic to cats? Russian Blues are also celebrity cats who have been featured in famous cartoons and TV shows.

With their strong internal clock, I’m sure Russian Blue will change your routine and Russian Blues are here to live for a long time.

Russian Blues have a plush blue coat that shimmers. The shimmering effect is due to the tipping effect. But, are Russian Blues’ coat blue? Well, in the cat language, blue means a lighter version of black. Kind of a grey color.

Let me talk a little about science to you. The color of Russian Blue varies from pale grey with white tipping to a darker, slate grey.

This grey color is due to diluted genes of black variation. Recessive genes are responsible for orange cats to turn into cream, black cats to grey, and brown cats to lilac color.

Well, all pure Russian Blues have a recessive gene of black which gives them a grey color. However, some Russian Blues can give birth to black cats as well due to cross-breeding with a dominant black gene.

Ah, this science talk is confusing, isn’t it? Just know that Russian Blues have a recessive gene of black variation!

Russian Blues have such a soft coat, that if you touch the coat, it feels soft, silky, and smooth. You can even trace lines on your Russian Blues’ coat which disappears when you smooth it out.

Russian Blues were hunted for their beautiful plush blue coat. Well, this theory somehow makes sense to me because the coat of Russian Blue is luxurious and soft.

Truly, Russian Blues have a spectacular coat that has mind-boggled people for years!

The vivid green, almond-shaped eyes of Russian Blues have caught the fancy of many people for many years.

As you might have guessed, Russian Blues are allegedly originated from the Arkhangelsk Isles of Russia. And Russian sailors bought these beauties to Europe and Britain in the 1800s.

Another theory suggests that Russian Blues are a natural breed. Russian Blues developed a thick coat to survive from cold. And since Russia and Scandinavian countries have frigid climate, Russian Blues have been told to have a definite origin in these places.

A Russian Folklore says that Russian Blues have healing properties. Russian Blue saved a prince from death due to supernatural healing. This incident made Russian Blues so beloved amongst the Royal family.

The Russian Czars and royal family kept these wonderful healing pets for years in the palace. Therefore, Russian Blues are said to have a royal lineage. What a regal cat!

Since time immemorial, humans and animals have survived on a symbiotic relationship. Symbiotic means taking advantage of each other without harm.

Similarly, cats and humans help each other in old times as well. Cats killed mice, pests, vermin, and prevented the spread of the plague. While the fellow humans provided cats with food.

Likewise, Russian Blues have hunters’ instincts warm in their blood. So, don’t be surprised if your Russian Blue brings you mice, birds, rabbits as a token of a gift for you!

Russian Blues especially run after small animals including fish and insects. If you have an aquarium at home, I don’t think it’s a good idea to keep a Russian Blue cat in the same room as an aquarium.

However, Russian Blues can make your home pest and mice free.

Russian Blue has a soft spot for their loved ones. And Russian Blues especially bond like superglue with one family member more than others. But affection, Russian Blues show to everyone in the family!

Russian Blues follow their owners everywhere around the house with their precious Mona Lisa smile. Your feline companion will snuggle with you, and even sleep on your lap if you will. Truly a loving cat, Russian Blue!

I think that the Blue in Russian Blue is about how Russian Blues love family members in times of blues.

Russian Blue cats are extremely intelligent cats. You will know this when Russian Blues learn tricks and social situations with extreme ease.

These magnificent Russian Blue cats are also very cautious. Maybe that is why Russian Blues find it so hard to warm up to strangers, new places, and pets.

It is, however, due to the cautiousness and intelligence that Russian Blues escaped from their hunters in the old days. Also, not to forget the long graceful legs that can run as well as tip-toe!

Working a 9-5 job and wondering if Russian Blues can survive a day without you? Well, worry not because Russian Blues are fairly independent cats. These felines can entertain themselves when you’re not around.

Russian Blues are dignified too. These felines can spare some alone time for you to work hard at your workplace. What an understanding cat!

Russian Blues are very low-maintenance cats. They don’t shed much and don’t need daily grooming. Russian Blues aren’t fussy about food. So, these lovely cat breeds can survive for an entire day without your presence.

Russian Blues can first act distant and aloof if they don’t know you. However, once these lovely felines understand your generous intent, Russian Blues stick with you like super glue.

Russian Blues will follow you everywhere in your house! Also acting sort of clingy and affectionate. Sometimes, even licking your face and purring and cuddling on your lap.

If you’re having a bad day, Russian Blues will cheer you up by their silly acts and lovely “smile”. Russian Blues blindly trust their owners and are very loyal too.

Ah, finally a hypoallergenic cat for you! But, let me break your bubble just a little. And that is, Russian Blues aren’t non-allergenic.

Therefore, If you have mild or moderate allergies from cats, then you might not suffer while cuddling with a Russian Blue.

Russian Blues Clean After Themselves

Russian Blues are very clean cats who are a big fan of hygiene and clean places.

A Russian Blue hates a dirty litter box and being dirty. You should clean their litter box every day else Russians might find somewhere else to go. Russian Blues also dislike dirty water bowl.

Russian Blue cats clean and groom after themselves for hours on end.

However, you too, have to do your part. You need to brush a Russian Blues’ coat twice a week. You should also bathe a Russian Blue twice a month to maintain a clean place so that your regal feline feels like a king and queen at home.

Therefore, generally, Russian Blues don’t suffer from diseases that other cats formed due to selective breeding suffer from.

Everything from a Russian Blues’ feeding time, playtime, walk time, grooming, brush time, and even the releasing time should fall exactly in their internal clock time. Otherwise, Russian Blues can go anxious and nervous.

Like, seriously, don’t expect your Russian Blue to happily accept your new guest in an instant! Russian Blue cats take time to warm up to new changes. So, it is better if you get a Russian Blue if you have a tight-knit family with a stable home environment.

Furthermore, if you are planning to wake up at 6 am every day, try feeding your Russian Blue at 6 am. After some days, you can notice that at exactly 6 am, your cat will wake you up with a meow. Your cat might even sit on your face to wake you up.

After all, early to bed, early to rise makes a man healthy, wealthy, and wise. And the reason you woke up early is all thanks to Russian Blue.

Russian Blues have an upturned mouth that looks like a smile. It’s so precious when you look at their gentle smile. If you compare the famous Mona Lisa smile with that of a Russian Blue, you will not find much difference.

Russian Blues Are A Celebrity Cat

The famous cartoon show Tom and Jerry is a beloved cartoon show of our childhood. Tom has a bluish coat so Tom is said to be a Russian Blue.

In a movie called Cat and Dogs, Russian Blue is a trained assassin.

Russian Blues are also featured in a cartoon Felicity from Felidae.

The famous YouTube meme called Nyan cat is a hybrid of a Russian Blue cat and a pop tart.

Russian Blue cats are an enigma and fascinate people with their stunning looks as well as personality. The history of this regal cat breed isn’t ordinary either!

Hope you had a fun time reading the reasons why Russian Blues are simply the best cats to be around. Hope you also get a Russian Blue and share a good and lovely time. Happy petting!