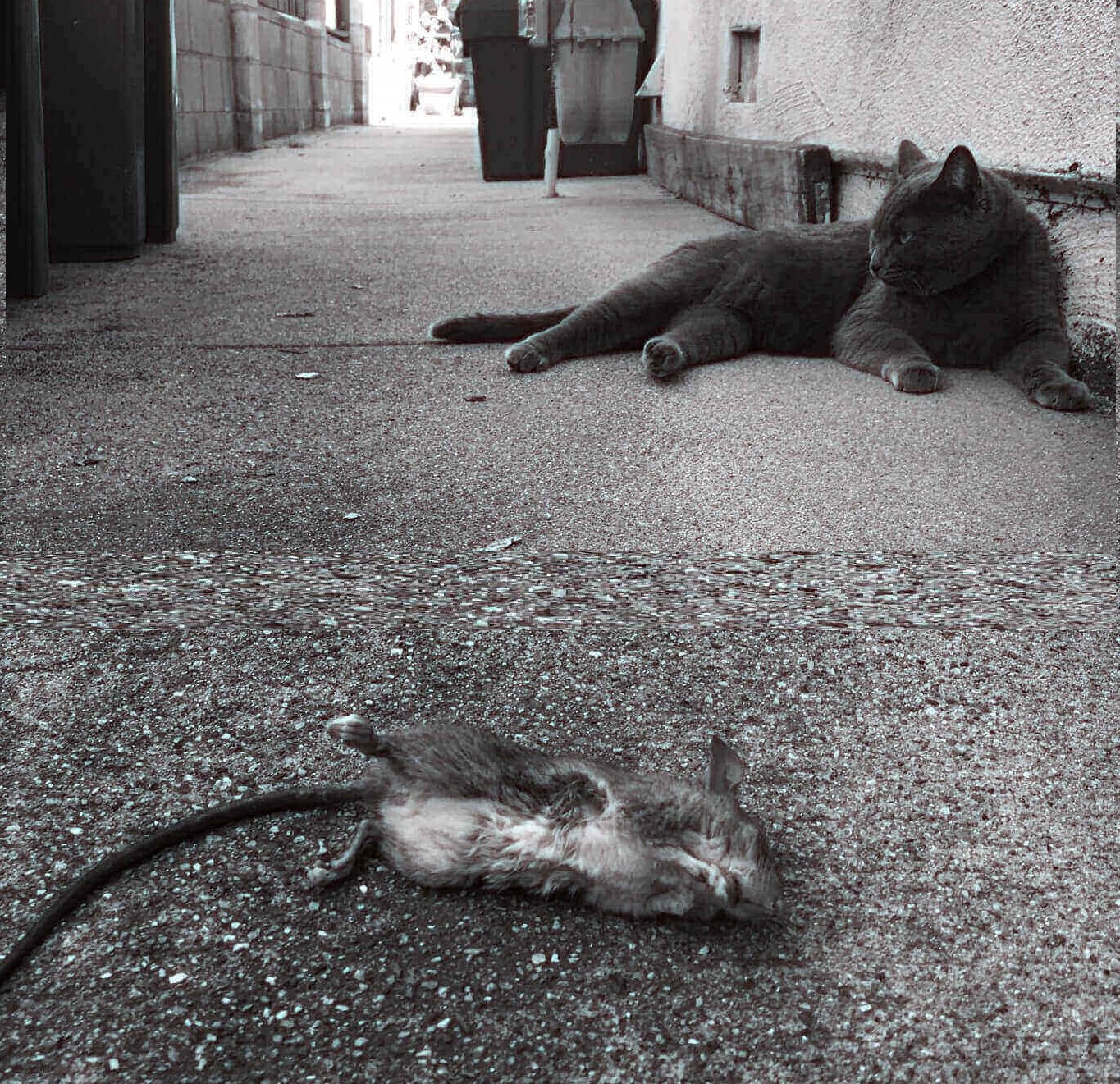 Most people assume that domestic cats are naturally aloof, but that’s not true at all. Domestic cats are highly social, and they hunt very actively. And, Russian Blue being one of the domestic cats, he has loving and sociable nature with wild hunting skills.

There is no doubt about Russian Blue being an enthusiastic hunter. He will chase rats, mice, or any rodents down with eagerness.

Being able to catch mice or not, partly depends on the Russian Blue Cat’s personality and also on his background.

Even though cats have excellent hunting instincts, they cannot hunt if their mother hasn’t taught them how to hunt.

Further, as a kitten, if Russian Blue was taught to chase and hunt mice or small animals by his mother then, he will be able to hunt fiercely. However, if Russian Blue has not gone through any pieces of training, he will hunt successfully, but he won’t be a good mouser.

If you want a mouser Russian Blue, then you can get it from someone who keeps their cats as a mouser.

Yes, your Russian blue cat can catch mice. Their hunting skill is the same just like other cat breeds. However, if your blues don’t seem interested in hunting mice then you can also train them.

Can I Train My Russian Blue to Catch Mice?

One greatest advantage of having a cat in a home is his love of catching mice. But, what if you have a Russian Blue who isn’t a good mouser? Or, you just bought a new Russian Blue home, and you are not sure if he will catch mice or not.

Nevertheless, there are few things you can do to help your Russian Blue catch mice or become a good mouser.

Naturally, Russian Blue loves playing, especially hunting games. And, his skill develops if you make him practice. If he has the practice to hunt, then he will automatically pounce when he sees a mouse. Cat toys with strings and feathers which he can chase is a good place to begin. Besides, you can also get them more best toys to play with it.

You be creative and think about such games where he can practice hunting and later if he is successful, reward him with a treat.

Making your Russian Blue watch a mouser cat will help him learn a lot. Especially, if your cat is young, show him older mousers, he will learn quickly.

You must have your Russian Blue learn from a professional.

Feeding Your Russian Blue and Keeping Him Safe

Feed your Russian Blue properly and timely. Giving him good food with all the nutrients makes his muscles and bones strong giving him more ability to hunt and play.

Also, it is very important to remove all the rodents’ poisons and traps that you’ve set out because your cat is still learning to hunt. Have a non-toxic rodent control to keep your cat and your children safe.

Praising Your Cat and Being Mindful of His Age

Often cat leaves a whole mouse or a piece of the mouse at the doorstep. Sometimes, he brings it to you. He is trying to show you how well he has hunted and, praising your cat for his good hunting skills will help him be better.

Besides, when your cat grows old, he will have less energy and may not hunt as fiercely as before. It is normal to feel lazy with age. You have to understand that your cat feels tired and has no energy to hunt.

What Should I Do When My Russian Blue Catches Mice?

When your Russian Blue catches a mouse, you will see a quite mess. Immediately clean the crime scene with disinfectant, wearing gloves to protect against the parasites.

Moreover, even if your cat caught a mouse, don’t let your cat eat it. According to Animal Medical Center, the mouse can carry parasites which cause Toxoplasmosis, which can transmit to cats, and even to human through cat’s poop.

Also, mice can be infected with roundworms, and they can pass that infection to your cat. However, your cat may not show the signs of illness, but take him to your veterinarian. He will confirm through the feces of your cat.

Even humans may not show any symptoms. But, if you have a fever, muscle ache, sore throat, or vision problem, I suggest you visit your doctor immediately. But, don’t panic, Toxoplasmosis can is treatable in both cats and humans.

There are also other Russian blue cat diseases which you should look after.

Will An Exposure to Rodents Harm My Russian Blue?

The answer is: Yes!

Exposure to rodents can harm your Russian Blue in several ways. Rodents can carry viruses, parasites, bacteria, and even toxins that can affect your cat as well as you.

Toxoplasmosis is one of the common parasitic diseases in cats. Toxoplasma Gondii parasite causes this disease.

Just like I said above, this disease affects both cats and humans. However, cats are the ideal host for Toxoplasma Gondii, because cats are the only animals in which this parasite can complete its lifecycle.

Some rodents also carry a Plague infection. Yersinia Pestis causes this infection. Plague is normally transmitted by fleas, but cats can get this infection by eating the meat of infected rodents. Infected cats go through depression, vomiting, diarrhea, fever, muscle pain, and coughing.

Some rodents carry Hantavirus as well. This infection is not so dangerous to cats but in humans, exposure to this virus can lead to serious health issues.

Further, you must never keep Rodenticide near your cat. If your cat eats rats poison, he may end up with a serious health condition.

If you see your cat with a dying rodent, just remove the rodent and clean the area. Do not let your cat eat rodents and your cat and you can stay safe.

How to Stop My Russian Blue From Catching Mice?

As an owner, you must understand that Russian Blue is a carnivore and he has a deep love for hunting.

However, if you have a concern about his health, you can do some things like: make him an indoor cat. He will still hunt rodents who enter his domain, but at least flying birds, and other small rodents stay alive.

Another thing you can do is give your Russian Blue a bell collar. A small bell on the cat’s neck will alert his prey when he is near. If your cat already wears a collar, you can simply hang a bell in his comfortable collar.

Besides, people also give the idea of declawing your cat. Declawing means cutting off the top joints of all his toes so that he cannot claw anymore. It will protect your cat from hunting, but also he cannot walk properly and he will be very unhappy. I wouldn’t suggest you do this to your feline.

How to Stop My Russian Blue from Attacking Other Animals or Pets?

People believe that Russian Blue will not hunt prey animals just because they are their pets. That’s not true. He will attack if you brought any bird, white mouse, or fancy rat as your other pet. He won’t look at them with love and affection, he will see them as his meal.

So, you should keep them safe and protected. Make sure you have a cage for your bird or the next room for your rat or white mouse. Even if you want to let your bird out of the case, make sure you let her out in a room with the door closed. Otherwise, your Russian Blue will leap into the air and catch her.

Can I Rent a Cat to Get Rid of Mice?

Yes! You can rent a cat to get rid of mice.

Even you can rent a cat temporarily for free. The temporary cat will leave its feline scent and deter the mice from infesting your home. If you want to get rid of unwanted mice without any cruel poisons, then renting a cat can be the best idea for you.

It is said that female cats are better mousers because they teach their kittens to hunt mice or other prey when they are young. Female cats also teach male cats to hunt adequately.

Why Do Cats Like Playing With Mice Before Killing Them?

Rodents like mice and rats can bite and scratch your cats. And birds also can cause a lot of damage to cats by biting or pecking with their sharp beak. That is why they try out their prey before killing them to avoid injuries.

Russian Blues are a pretty lovable cat breed. But sometimes they loves to hunt. That’s why give proper training to your blues from the beginning if you cannot handle mice at your house.