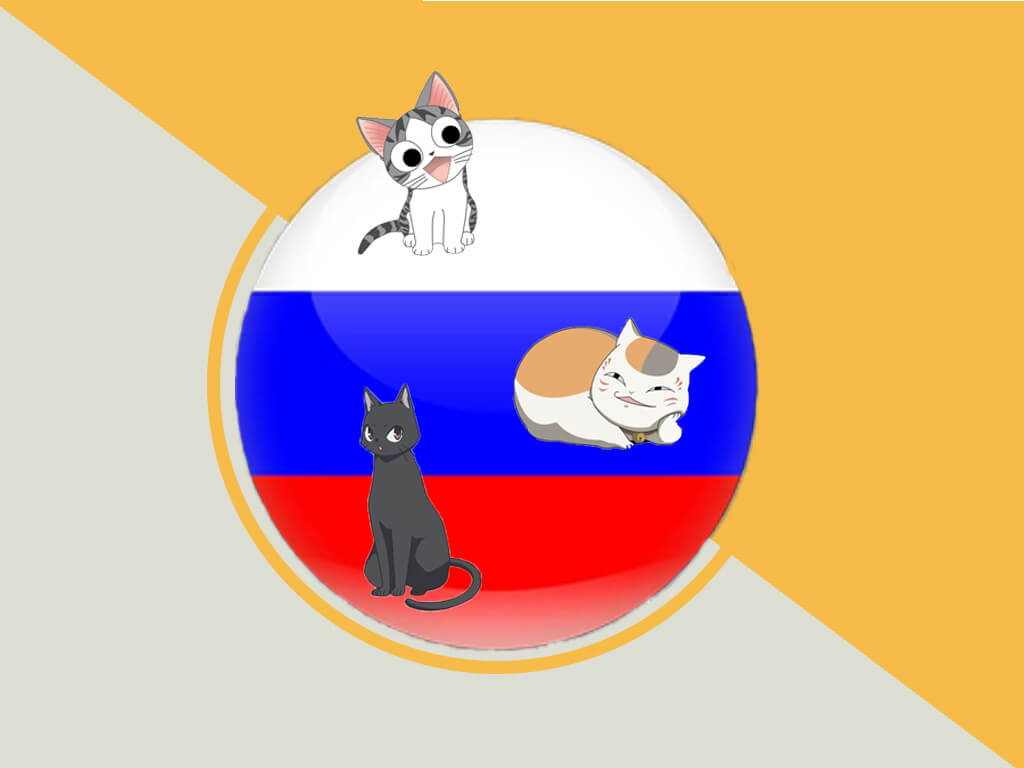 So, I was lying in my bed when I read that 60 percent of Russians own at least one cat, making them the most feline-friendly people in the world. Then, it just occurred to me that there have to be dozens of breeds of cats from Russia other than only the Russian Blue that I know of.

After some research, I found out that Russian Blue is not the only cat that originates from Russia. Along with Russian blue, there are 9 other breeds of cats from Russia such as the Siberian cat, Donskoy cat, Neva Masquerade, Peterbald, Kurilian Bobtail, Toybob, Karelian Bobtail, Mekong Bobtail, Ural Rex, Ussuri Cat, all with different personality traits and behavior attitudes. Let’s know more about these breeds.

Russian Blue cats, also termed Archangel Cat, are known to be one of the friendliest feline breeds for children to be around. Not only this, but Russian Blue cats are medium to large in size, full of elegance and grace.

With their long, slim legs they normally tiptoe around the house. These cats have distinct bright green eyes with a wedge-shaped head. Although Russian Blues have thick double-coated furs, they shed very little. One has to be very clean around these felines as they don’t like dirty surroundings.

Even though Russian Blues are sensitive and shy at times they very, much like playing fetch and are loyal breeds to have around in your house.

Siberian cats are often known as Siberian Forest Cats or Moscow Longhairs. Furthermore, Siberian cats have a record of being very cuddly and comfortable with their humans.

Siberians will follow you all around the house, whether you like it or not, with their playful nature and fluffy long hair. This breed is very much compared to a dog because of its amazing jumping abilities and its character to wait for its human at the door with its expressive eyes when you arrive.

What’s more? Siberian cats have a problem-solving ability to get what they want and can sometimes force you to do things their way.

Donskoy Cats, frequently referred to as Don Sphynx, Russian Donskoy, Don Hairless, and Russian Hairless are medium-sized cats identified for having little to no hair and wrinkled skin which resembles human skin.

Moreover, Donskoy cats are both very intelligent and affectionate and are very loyal to humans. Although known to be elegant and soft-hearted cats who are easy to train, these cats need a substantial amount of attention and interaction with their humans.

Similarly, the lack of hair in the body makes it harder for them to adjust to temperature extremes and prefer to stay indoors. They have to be wiped properly at least once a day as there is no hair to absorb the oil produced by their body.

Neva Masquerade cats are a Siberian breed with a specific color point variation than the traditional Siberian cat. Besides, they are normally all white with a patch of black or brown in their body.

The breed is high in demand in Russia and is categorized as a very rare feline breed. This breed is friendly and satisfied as long as they receive love and care from its human might be that is why they are classified as outdoor cats.

What’s more? These cats are quite curious and love to play with water. The hunter instinct within the cat makes it more active than most cats. So, if you have a garden ready for the play, these cats are for you!

Peterbald cats true to their name are hairless and can be found in different colors. The sophisticated naked Peterbald is known to be athletic and often looks like it is performing an aerial ballet while playing.

To add up, Peterbalds are regarded as very affectionate and beloved companions as it is very social with adults, children, and even dogs and other pets. The hairless breed is termed as high maintenance than other cat breeds and needs proper grooming from time to time. They can not tolerate cold temperatures and prefer cozy indoors.

Kurilian Bobtail comes in solid colors, as well as tabby and tortoiseshell patterns, with or without markings. Moreover, the tail of this breed is its distinct feature which looks like a pompom and it is said that no two tails of this breed look alike.

Likewise, the hind legs and energy of the Bobtail make it an incredible jumper and are often acknowledged for its hunting actions. With all these features bobtails are very adapting, trusting, outgoing, and very social breeds making them perfect for a family.

Toybob cats fall under the cute category of cats with a bobbed tail. Likewise, they are known as one of the smallest breeds who only grow to the size of a kitten of 3 to 6 months of another breed. However, the body is proportionate with moderate muscle tone and good body structure.

Toybobs are by nature very active, playful, and affectionate cats without being hyperactive and overly demanding. Besides, having said that they do not do very well on their own for a very long time, they prefer to be around humans, children, or other pets indoors playing and purring around.

Karelian Bobtail, like its name, has a pompom-shaped tail with a medium-sized body build-up. These breeds like other Bobtail breeds are family-friendly with playful and curious nature. Similarly, they enjoy the company of adults, children, and other pets too. Besides, Karelian Bobtail is sometimes very protective when it comes to its human family.

The distinct feature of this breed is the upright, large ears that appear quite high in the head. In addition, Karelian Bobtails are a rare, beautiful, and unique breed of the bobtailed family. Hence, you should not confuse the Karelian Bobtails with the Kurilian Bobtails.

So, it is safe to claim that these cats are basically from Russia!

Additionally, a fun fact about Mekong Bobtail is that they are royal cats that have their bloodline related to the ones owned by Russian Emperor Nicholas II and King Siam around the 19th century. Besides, it is the perfect mix of bobtails and a little Siamese cats. The very fact makes it unique in its looks and temperaments than other cats.

Even though the Mekong Bobtail appears to be quite the same as the Siamese cats due to the color and beautiful blue eyes, there are some differences in the body shape. This breed of Mekong does have a bobtail that is stumpy if you ask why they are called one.

The Ural Rex is a quiet and equilibrated cat having curly hair. You can say that these cats are inhabitants of the Urals in Russia during the pre-war era. However, in the Second World War, the number of these wonderful cats decreased by a bunch.

Hence sadly, Ural Rex is now not found as they are extinct cats. However, you will find a few pieces of information regarding these cats from the 1960s. Besides, it is easy going and very friendly with children, people, and other pets you have in the house.

The good news is you will still be able to have this exclusive breed at your home but only a mutated version of them is available!

Ussuri cats are originally cats from the Amur Forest of Russia. These breeds are generally very rare and allergy-resistant. Unlike other cats, it is purely genetic and has a little coloring to it.

If you are into wild cats then these Ussuri cats are meant for you. The natural hunting instinct makes the cats more of an outdoor lover than an indoor cat. Although they are wild, Ussuri cats create a strong bond with their household while making themselves affectionate to people.

But, it undeniably loves independence and freedom. Moreover, there are distinct lines in its body with stripes that make it unique!

Russians are very fond of cats. It is clear since the research suggests most Russians have one cat in their house. So, why is it that the Russian prefer cats? Let us find out!

Cats that originate from Russian have unique features than other cats because they have natural beauty striking the people that lay their eyes on the cats! Moreover, the distinctive breeds have a sort of attractive feature that makes people drawn to them.

Apart from that, you will find a cat that will suit your personality as the cats are available in various forms, temperaments and personality themselves. From haired to hairless cats, from indoor to outdoor cats, from sweet tempered to wild cats, you can have all the varieties of Russian cats that you can possibly think of!

Cats from Russia have the feature of being less allergenic. Maybe because they have short hairs or even no hair at all when it comes to sphynx cats. However, the ones who love cats but are allergic to them should undeniably check out cats from Russia.

The cats from Russia are well known for their family-friendly nature. Even though some of the cats are termed wild which makes the cats love their freedom, they still have an attachment with the family.

Similarly, the cats might have hunting instincts, but they still have a soft corner for humans and are peace-loving! Besides, some of the cats are even protective towards their family!

Thus, I hope I was able to give you some insights into the Russian cat breeds. The above cats from Russia are all unique on their own from appearances, care requirements to temperaments.

Hence, if you decide on bringing a cat home or adopting cats from Russia, you should remember to check their lifestyle and home arrangements. Moreover, match your personality with theirs to be the best parents as well as happy owners!

Make sure you comment down below about your experience with your cats from Russia. I will be glad to hear from you!