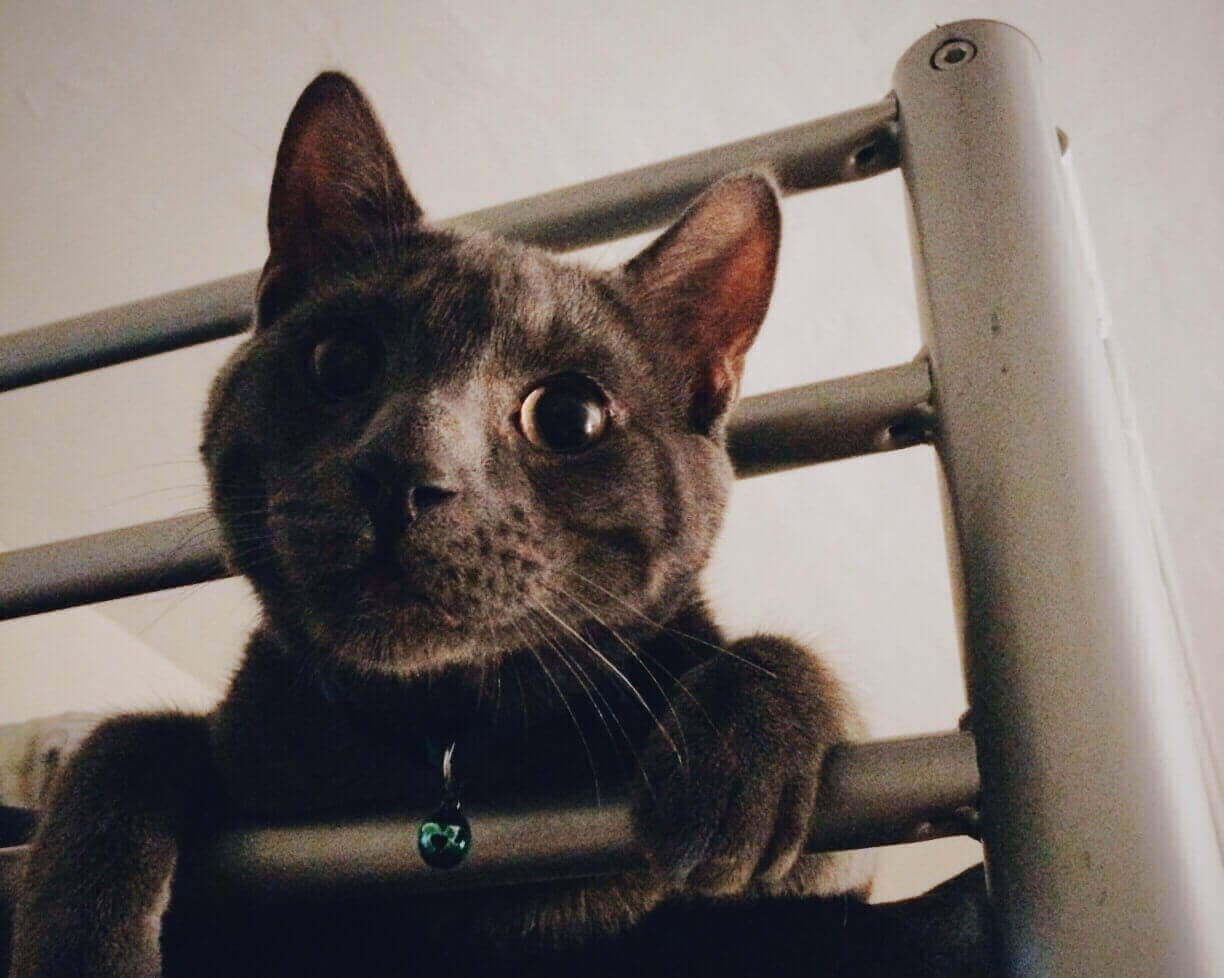 No, the pure breed of Russian blue cat doesn’t have any white markings on them instead they have one coat color. Their coat is an even, bright blue-colored with no markings, not even a white spot. But if the cat you supposedly thought was Russian Blue has white markings, it might be because they are some cross-breed cat with 50% Russian Blue genes.

Let’s learn how to distinguish Russian blue from any other blue cat if you ever come across a very similar resemblance.

Can Russian Blue Cats Have White Markings On Them?

No, this is the shortest answer to the question you have asked. There is no chance Russian blue will develop any white markings if they are pure breed and bloodline.

These Russian Blue have a distinctively bluish color with the hind of silver shine on the tip of the furry hair. There is no such markings or spots on them that will make them cats with a different color mix.

Thus, if you ever across a blue cat with similar characteristics as Russian blue but has white spots on them, then sorry to say they are not Russian Blue.

Russian blue cats have one plain, bright and shiny as well as a solid bluish-colored coat. The tip of their guard hair is shiny silver making them bright and attractive.

Here are some of the common yet helpful features that will help you identify your cat:

What Might Be Cause Of White Spots In Russian Blue Cat?

There are various reasons for cats to have white spots on their body. Here is the list of a few of them that might cause your supposed Russian blue to have White markings:

If you see any white markings or spots on the body of a Russian blue cat, there is a chance of them not being from the pure bloodline.

Somewhere in the family tree, there might have been some derivation in the mating process making white markings a recessive trait.

It might not show right at the moment but will stay dormant for many years and pop out after a few generations.

While your Russian blue Queen is out in the kitten season, she tends to mate with numerous Tom despite their breed. This can result in different consequences that you’ll not like.

One Russian blue queen can give birth to 3 to 4 kittens and each of them can have a different father. And distinctive father yet the same mother will make each kitten slightly different than others.

So, there is a possibility that the Russian Blue kitten you have is a mixed breed that carries 50% genes of another cat breed.

Moreover, this can result in markings that may be white or any other color in their body.

You may have heard of the disease called vitiligo. Not that it is common but can be a reason for felines to lose their natural pigment.

This Vitiligo disease is even seen in humans as well as dogs. The effect on the skin due to this disease can be easily identified with the whitening of the hair of cats.

It is not one of the diseases that occur frequently among cats. But this might be the reason your Russian blue has white hair in their body.

Besides, there are other Russian Blue cat diseases that you should look after from time to time to keep your cat healthy.

People and their scientific experiments on animals can lead to hundred of consequences. One of them is the black and white Russian Blue cat.

Although there are white and black colored Russian blues listed the natural pigment of these cats is Blue.

Aging can lead the hair color to change into whitish color from the shiny grey or blue pigment. It is commonly seen among cats and is clearly a sign that your cat is getting old.

How Can You Know If Your Cat Is Russian Blue Or Not?

If you are having second thoughts about your cat being Russian blue, there are ways to clear your doubt.

Here are the things you can do to know whether the cat is Russian blue or not:

Most of the time when you ask someone about the cats’ breed, they show pedigree to confirm the breed.

Pedigree is a record or a piece of paper that carries the information of descent of an animal or here cat. It is a confirmation letter that shows whether your cat is purebred or not.

When you adopt the cat from the adoption center or purchase it, you will be given a pedigree about the cat.

This is the simplest and most reliable method to know whether the cat you have is Russian Blue or a mixed breed.

When you don’t have the paper saying if your cat is Russian blue or not, go for experts’ advice.

Some experts who have been working in the same field and have experienced eyes can distinguish Russian blue easily than others.

You will have a hard time figuring out the differences between a few blue cats if they are kept together. So, it is better to seek guidance here.

What Does It Mean If Your Supposedly Russian Blue Cat Has White Markings On Them?

There are hundreds of instances where people mistake Korat or Chartreux as a Russian blue cat. These cats carry nearly similar colors and features as Russian Blue cats so it is quite necessary to research beforehand.

You have (or need to say that you have) a blue domestic shorthair that looks like a Russian blue cat.

This can be some kind of misunderstanding or lack of research when people mistake domestic short-hair for Russian Blue.

This also implies that the cat you have is not a pure breed of Russian Blue and has derivation in their bloodlines.

If you ever come across a black and white Russian blue cat, remember that is not their natural color. It is a man-made artificially colored cat rather than the complete grey or bluish color as nature made them.

Sometimes the pigment present in the cat starts to get lost over time. It is due to genetic conditions or diseases leading to white or lightened spots on the hair or skin.

Is Your Russian Blue Cat A Mix?

Yes, there is a possibility of your Russian blue can be a mix-raced cat rather than a pure breed. No pure breed of a pure bloodline of Russian Blue bears any white markings in their body.

But if your cat is a mix of 50% Russian blue and 50% some other cat genes, then they can have white markings while exhibiting most of the character as Russian Blue.

When a purebred Russian blue cat mates with other cats rather than Russian blue, there is a chance to get a cat with similar features as Russian blue but with slightly different coat color or marks. So, proper learning of the Russian Blue cat breed standard and their characteristics is necessary.

Likewise, one Russian blue queen can mate with various Tom during kitten season resulting in different kittens in a litter.

Here are some of the most or frequently asked questions along with their answer about the Russian Blue cat:

Is My Cat A Russian Blue Or Just Grey?

You need to have a breed paper to confirm if the cat you have is Russian blue or not. There are few grey cats or as fancier calls them blue cats that show similar features as Russian Blue.

Yes, they do. Russian blue cats are born with yellow eyes that in turn start to change color with age. These cats’ eyes start to manifest a green-colored rim around the iris 4 months after they are born.

They will have a distinctive green color as an adult and is one of the main features to distinguish them from other blue cats. Here, you can learn more about the Russian Blue cat changing eye colors timeline.

Even if you have a cat that has similar features as Russian blue and has white markings, that won’t make a difference in how you need to care for them. These cats are still your loving feline friend who will love you back no matter what color they come in.