Russian Blue Vs Other Breeds

Have you been wondering why your Russian Blue loves to be around you but retreats when you have guests over? Do you find it strange how your Blue is excited to greet you when you return home one second, and the next is trying to isolate itself in a corner of the house?

There are many aspects of a Russian Blue’s personality, which will help you form a better bond with them. For instance, even though they are sociable, they also crave downtime. Why does your Russian Blue sometimes seem to get the blues?

Below, I have all the explanations you need to understand your Russian Blue’s personality traits. Furthermore, you will also learn why they act the way they do!

What are the Major Personality Traits of a Russian Blue Cat?

There are some very distinct and interesting personality traits of Russian Blues, which make them so lovable. Furthermore, this particular breed of cats is one of the most intelligent. They are also inquisitive yet composed, and they like your company but are not too dependent.

Hence, let us look at the details of their temperament to understand what makes them such great household pets!

Russian Blues are a mild-mannered, loyal, and intelligent cat breed. Although they love playing with you, they will also want to get some downtime. They are active, but also have the tendency to look for a private spot in the house simply to sleep!

Hence, make sure that you provide them with a cat bed or a scratching post with a “nest” on top. This will allow them a place on which they can lie down. Additionally, the best spot for a scratching post is next to a window so that your Russian Blue can soak in some sunlight.

This breed of cats is intelligent, which means that they constantly require not only physical but also mental stimulation.

In order to satiate their need for mental stimulation, you can provide them with toys that require them to play with it to get a reward. For instance, an interactive toy that releases food if your Russian Blue is able to “solve the puzzle”, is the best bet!

Another important thing to keep in mind, if you have a Russian Blue kitten, is that they are a lot more active. Hence, do not get the wrong impression if they are pulling apart your closet or parts of your house. They are sure to become a lot calmer as they grow older.

However, even adult Russian Blues can get themselves into some mischief. Russian Blues in general are highly intelligent and constantly looking for mental stimulation. Hence, make note of not leaving important items around the house that your Blue could possibly get their paws on!

Nonetheless, be sure to leave a number of toys, which will allow them to manipulate it to get hidden treats. This will ensure that your Blue is entertained while you are away. Furthermore, this will also prevent your Blue from wanting to ruin some other valuable item/part of your house.

Are They Really Social?

Moreover, although they seem sociable around you, they might shy away from people that they do not know. Hence, do not be startled if they become a bit aloof around your houseguests. There is a good chance that they will warm up to them soon and start acting like themselves again.

Additionally, Russian Blues also prefer to remain clean! This includes not only a clean litter box but also clean paws and a clean coat of fur. Hence, do not be surprised if you catch them licking or scratching themselves to rid themselves of dirt.

This particular habit of keeping themselves clean should only make your job that much easier as a cat owner!

Moreover, because of their friendly demeanor, their intelligence, and their liveliness, it is very easy to train them. Be sure to check out the article on How to Train Russian Blues on our website too!

Finally, because Russian Blues are mild-mannered, they are naturally easy to take care of. Hence, below I have some tips on how best to do so.

Now that you have all the details of their temperament, it will simplify the task of taking care of them. However, there are things that you need to keep in mind to provide your cat with the best care.

For instance, your Russian Blue will always want to have a clean litter box. If there is a lack of a clean litter box, chances are high that they will go look for a cleaner spot in your house to relieve themselves!

Furthermore, because of their easygoing demeanor, it is easy to take care of them. Especially in regards to bathing them, grooming them, cleaning their ears, eyes, and teeth. Hence, if you have a Blue consider yourself lucky since this breed is one of the easiest to care for.

For more information, you can check out the article, How to Clean and Groom Russian Blues!

Three Sub-Breeds of Russian Blues and Their Personalities

The first Russian Blues recorded in history was back in 1875 in Russia. However, during World War II, this cat breed was almost pushed into extinction because some breeders crossbred them with blue Siamese and British Shorthairs.

However, soon after the war ended, some breeders in the U.S.A. and Britain bred them again and restored them back to their original breed.

The reason I am stating these facts is that in the present day there are three distinct sub-breeds of Russian Blues with distinct personality traits. Hence, let us look at these sub-breeds and understand how their personalities differ from each other.

This sub-breed of Russian Blues is a bit smaller than the average Russian Blue. Their fur is usually darker and their ears are further away from each other than the other sub-breeds.

They also tend to be less friendly and more reserved. Hence, Siberian/Scandinavian Blues are the least favorite amongst most cat breeders.

The American sub-breed of Russian Blues are medium-sized Blues, with lighter colored fur. Their ears are widely spaced but not so much as the Siberian/Scandinavian Blue.

Most importantly, they are the friendliest of the Blues and love to socialize with everyone, including strangers! Hence, if you are looking for a Blue with these personality traits, you are in luck! Most breeders prefer this sub-breed too!

The British Blues are moderately sociable amongst the three sub-breeds of Blues. They have a powerful build and have ears that are closer together, which point straight up. Hence, if you are looking to adopt a Blue who is not clingy but still affectionate, then British Blues are the way to go!

If you have younger children, elderly people, or people with special needs in your household, Russian Blues are perfect for you. This is mainly due to their calm mannerisms.

However, be sure to remember that they do require mental stimulation just as much as physical stimulation. Therefore, do not think that letting them run around the house is enough!

Always make a note to provide them with plenty of mentally challenging toys. The ideal the ones being the ones that will release a treat/reward at the end!

Finally, even with all the toys and mental stimulation, do not forget to spend quality time with your Russian Blue. Although they love their downtime, they also love the company of their favorite human!

So do you like the above personality traits of a Russian Blue cat? 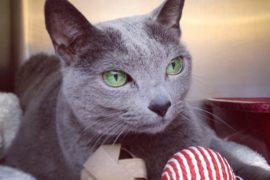 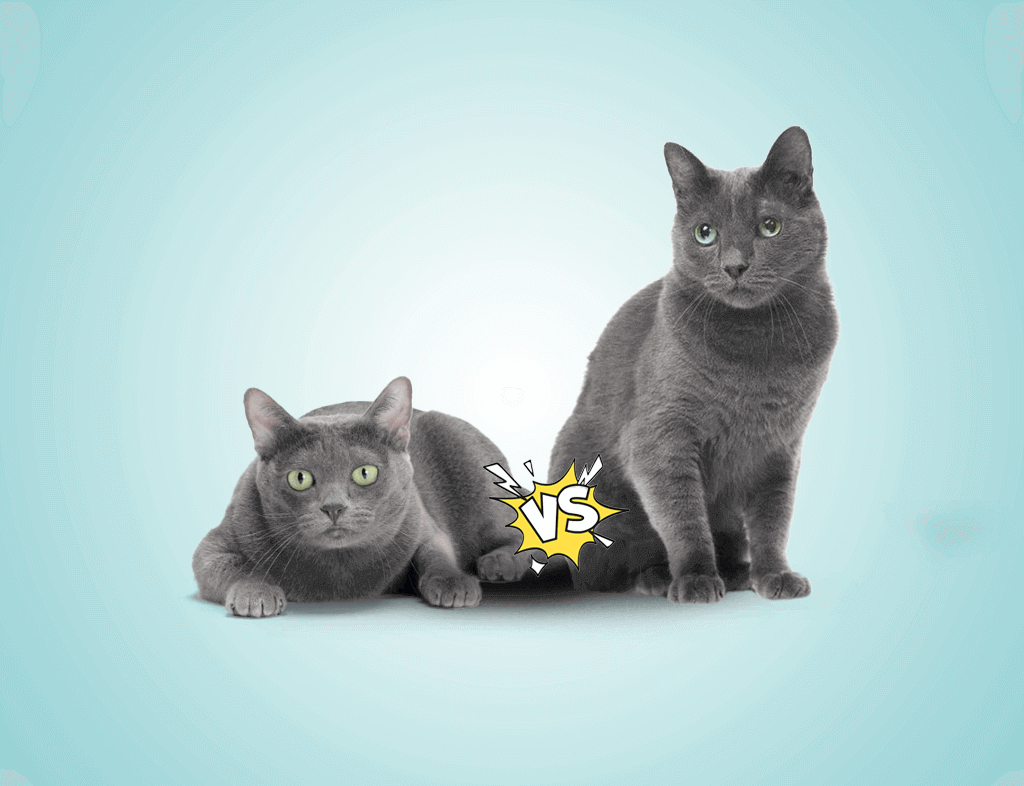 Russian Blue Vs Korat Cat: Which Cat Is Right One For You? 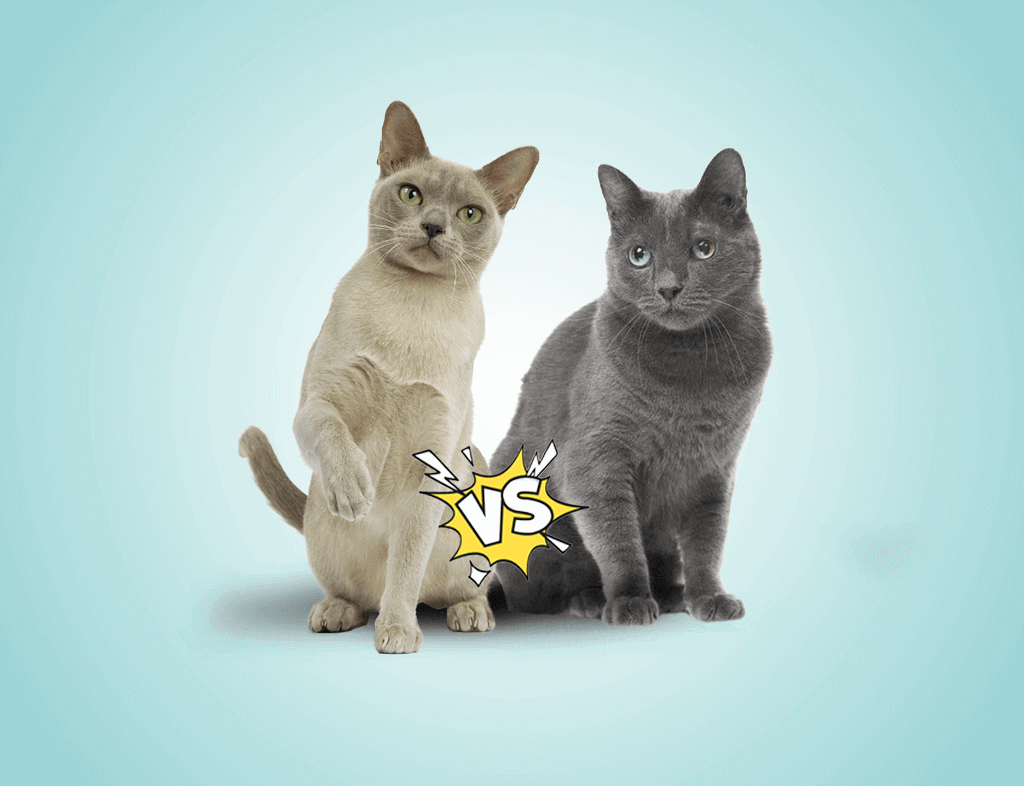 Russian Blue Cat Vs Burmese Cat: Which Cat Breed Is Right For You?